Joe Biden is facing potential conflict of four fronts as he focuses on Russia’s invasion of Ukraine but is being tested by North Korea, China and Iran.

The embattled president is considering deploying up to 50,000 US troops to Eastern Europe to ward off Russian aggression.

But as the issue consumes his time, energy and soon military forces, America’s arch-foes appear to be testing him.

North Korea launched two cruise missiles tests on Tuesday, for the fifth time this month in a huge ramping up of their efforts.

Iran-backed rebels launched a rocket attack on an air base housing 2,000 US soldiers on Monday, forcing Patriot defense system to swing into action.

Two inbound missiles were knocked out of the sky.

And China is testing US resolve over Taiwan and free passage through the South China Straits to the extent that the US has deployed two aircraft carriers to the area to ensure that Beijing does not try to exploit the potential Ukraine invasion.

The USS Carl Vinson and Abraham Lincoln as well as a huge strike group are now on patrol in the South China Sea.

Embarrassingly, an F-35 stealth fighter crashed on landing on Monday and fell into the sea. The pilot ejected and seven sailors were injured.

Now there is a race to recover the state-of-the-art jet before Beijing gets to it.

Meanwhile, Biden’s approval rating hit another grim record on Tuesday with a new poll placing him with just 39 percent of voters’ support.

A separate survey suggested the president has lost the faith of Americans who largely think he does not care about them and is a weak leader, both dire outcomes just a year after he took office.

The under pressure president was forced to apologize to a reporter last night after he was caught calling him a ‘son of a b***h’ on a hot mic.

A top member of the U.S. team negotiating with Iran has left the role after urging a tougher stance on nuclear talks.

A State Department official confirmed that Richard Nephew, known as the architect of sanctions on Tehran, had stepped down as U.S. Deputy Special Envoy for Iran.

At the same time, the Wall Street Journal reported that two other negotiators had stepped aside because they wanted a harder negotiating position.

The team’s policy differences reportedly involved the enforcement of existing sanctions and even pulling out of the talks altogether.

Their departures, another blow to President Joe Biden’s foreign policy goals and a State Department grappling with Russian diplomats who appear poised for conflict in Ukraine, come at a critical time in talks that resumed two months ago.

Western diplomats say they hope for a breakthrough in the coming weeks – but critical differences remain between the two sides and Britain on Tuesday warned of a looming impasse.

Meanwhile the Biden administration has been grappling with bipartisan criticism at home that it’s taken too soft a stance against Iran as the Middle Eastern nation builds up its nuclear capabilities at breakneck speed.

Race to beat China to recover $100m US F-35 stealth fighter from bottom of South China Sea after it crash landed on aircraft carrier USS Carl Vinson: Fears secret technology from America’s most advanced jet could fall into enemy hands 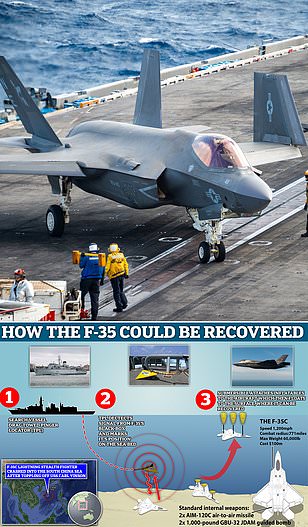 The U.S. faces a race to beat China in recovering an F-35 stealth fighter that plunged into the South China Sea on Monday after what the Navy termed a ‘landing mishap’ aboard the USS Carl Vinson.

The pilot was forced to eject and seven military personnel in total were injured.

The $100m warplane, customised for naval operations, plunged overboard, the US 7th Fleet said – making it the second time in three months that an F-35 has been lost overboard.

‘An F-35C Lightning II assigned to Carrier Air Wing (CVW) 2, embarked aboard USS (CVN 70) had a landing mishap and impacted the flight deck and subsequently fell to the water during routine flight operations,’ it said in a statement to US Naval Institute News.

‘Impact to the flight deck was superficial and all equipment for flight operations is operational.’

It added that the aircraft carrier had been able to resume normal flight operations shortly after.

But it leaves the Navy with a complex salvage operation if it is avoid its most sophisticated warplane, crammed with futuristic technology, falling into Chinese hands.

The US Navy did not respond to follow-up questions about whether it had launched a salvage operation.

Biden’s approval rating hits a dire 39% as a majority of Americans say he’s not a strong leader and don’t think he cares about them, new polls suggest 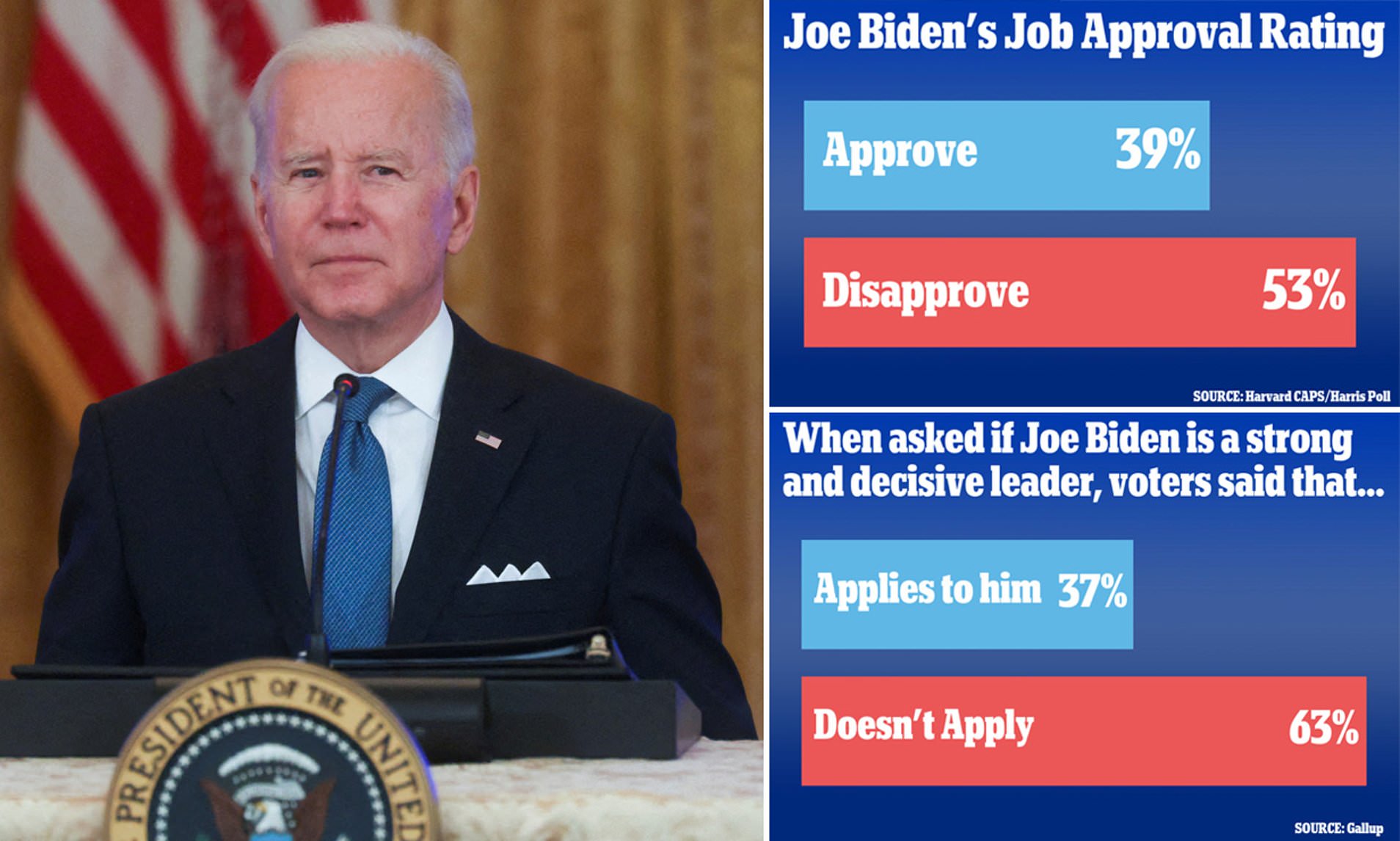 President Joe Biden’s approval rating hit another grim record on Tuesday with a new poll placing him with just 39 percent of voters’ support.

Meanwhile a separate survey suggests the president has lost the faith of Americans who largely think he does not care about them and is a weak leader, both dire outcomes just a year after he took office.

Biden’s job approval plummeted six points from November, according to a January Harvard CAPS/Harris survey obtained by The Hill. The 39 percentage points are the lowest he’s scored in Harvard’s poll since it first began collecting the data in March.

His disapproval rating has climbed to 53 percent, up two points from the previous poll.

Of those who approve of Biden’s job in office, less than half say they ‘strongly’ support the president while most only ‘somewhat’ back him.

‘This is a new low for President Biden as he struggles to solve a myriad of issues from the pandemic and the economy to immigration and crime that trouble the public,’ said pollster Mark Penn of the survey taken January 19 and 20.

As 40-year high inflation and the enduring coronavirus pandemic continue to wreak havoc at home, the world is also looking to Biden as an increasingly aggressive Russia threatens to shake up the world order and launch a likely deadly invasion into neighboring Ukraine.

It does not appear that many Americans have faith in Biden navigating those issues, according to a survey Gallup also released on Tuesday.